Paul, Jerusalem and the Judaisers published 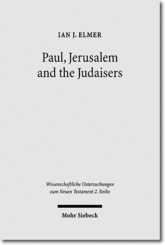 A dissertation that I first mentioned last July is now being published by Mohr Siebeck.

On this side of the pond it can be purchased from Eisenbrauns for $105.

I wonder if he fixed his reference to Pummer…I guess it’s too late to tell him about it now. Sorry Ian…er…I mean Dr. Elmer.

Galatians and the Imperial Cult review on RBL

Review of Biblical Literature has posted Wilhelm Pratscher’s review of

The Studiorum Novi Testamenti Societas 2009 meeting, August 4-7, will have three presentations related to Galatians in the Pauline Theology in Galatians and Romans section under Gaventa, Barclay, and de Boer:

Susan Eastman (Duke, USA; guest), “The Identity of Israel and the Mercy of God in Galatians and Romans.”

It took more than ten days but EThOS today posted the first of the dissertations I requested. The following is now available for download.

This study focuses on Galatians 2:19, “For I through the law died unto the law, that I might live unto God,” as the juxtaposition of law and cross in Paul’s thinking. The law and the cross represent the “before and after” of Paul’s life. He concludes that the law brings death and that Paul viewed faith in Christ as the only “life-bringer.”

Concerning the issue of a mediator (Moses) and angels giving the law he says “Paul’s point seems not so much to be that of disparaging the origin of law by denying divine authorship, but rather to contrast its inferior nature to the direct gift and revelation of gospel-promise” (240).
The irony of this is that the gospel-promise is meditated to us through the NT authors. Is the gospel any more direct for us than the law was for first century Jews? They had Moses and messengers, we have the apostles and the thousands of scribes who copied out the manuscripts and the messengers who delivered it.